After giving over 40 people their first virtual reality experience, to my amazement; Every. Single. Person. Is. Blown. Away. Why is this? People enter the virtual world and start giggling. They enter a childlike state of wonder. I’ve never seen this type of reaction to any technology I’ve ever demoed.

“VR hits on so many levels.
It’s a real out-of-body experience, and yet completely grounded in your body”
Mark Bolas, USC School of Cinematic Arts

This type of reaction naturally evokes questions. VR has gone mainstream in 2016 and people want to know how it works, who’s doing what, and where it’s all heading. If you would prefer to listen to a podcast discussing the topic go here, otherwise, read on…

The world of alternate realities is a complex one with buckets of jargon. Let’s simplify it. In this post we’re focusing on virtual reality (VR), but there is also augmented reality (AR) and mixed reality (MR) and it’s important to understand the differences.

VR as a concept has been around for longer than one might think.

It can be traced back to 1838 with Charles Wheatstone’s invention, the ‘stereoscope’. Charles demonstrated how the brain processes the slightly different images coming from each of our eyes into one 3D image. This was demonstrated by viewing two side-by-side stereoscopic images through a stereoscope, giving the viewer the illusion of depth. This breakthrough was the foundation for the VR kit we enjoy today.

A chap by the name of Sir David Brewster then picked up on the concept and developed the first portable 3D viewing device in 1849 that used cards like the one shown below.

An early stereoscopic card showing a woman using a stereoscope!

In the 1930s Stanly G. Weinbaum then cemented his place in the VR history with the wonderful story of Pygmalion’s Spectacles. With an uncanny likeness to today’s modern VR devices, Stanly’s idea was a pair of goggles delivering a holographic experience that included smell, taste and touch.

We soon had the popular View-Master in 1939 that was first used for ‘virtual tourism’. Around the time the View-Master was becoming popular, the French Director, Actor and Poet, Antonin Artaud coined the term ‘virtual reality’ for the first time. He used the term to describe “the illusory nature of characters and objects in the theatre” which closely describes the virtual realities people can find themselves immersed in today. 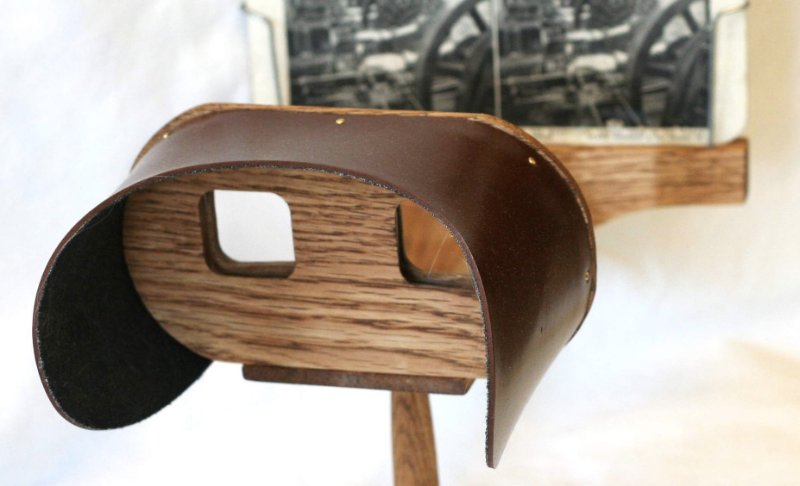 These are among some of the early references (there are many more) however, they’re not describing what we now know as ‘VR’. The multitalented Jaron Lanier is commonly cited as the forefather of modern VR through his company VPL Research, which he founded in 1984. Jaron and the team were ahead of the curve creating the first ‘VR headset’ called… wait for it… the ‘EyePhone’. They also explored 3D sound, haptics, 3D rendering and even created their own programming language. Sadly, they filed for bankruptcy in 1990 and Sun Microsystems later acquired all of their patents in 1999.

The masses were then exposed to VR through feature films such The Lawn Mower Man in 1992, which also signalled an explosion of VR research in the 1990s.

How does this wizardry work?

Having two eyes is known as having ‘binocular vision’. As Charles Wheatstone demonstrated, the view from each of our eyes is slightly different, and our brain combines those two different views to create a single 3D image in our minds called a ‘stereoscopic image’. This is the principle that’s then leveraged to trick your brain into thinking you’re somewhere entirely different — in a virtual world!

Today’s VR kit uses this technique delivered via heads-up displays (HUDs) to essentially display two moving images (one for each eye) to the user. The reason for VR’s popularity in the consumer world right now is that the technology has reached a place where it’s a) cost-effective to manufacture, and b) delivers a compelling multi-sensorial experience.

This ‘multi-sensorial experience’ is central to VR’s success. It leverages stereopsis alongside multiple other inputs to enhance the experience, giving the user an enhanced sense of ‘immersion’ or ‘presence’ (actually being in another world entirely*).

3D sound is also being employed to boost immersion and is a critical component of any great VR experience. In addition, head and motion tracking via infrared sensors, gyroscopes and accelerometers ensure you can look — and in some cases walk — around inside your virtual world. There’s also hand tracking and the inclusion of haptics available so you can feel the world around you. Following this to it’s natural conclusion, body suits are in production so you can feel everything.

*Caution — If you’ve not tried modern high-end VR (e.g. Oculus’ ‘Rift’ or HTCs ‘Vive’), then you will naturally be sceptical. If you have the chance to try such things, proceed with caution, as you may find your scepticism melt away.

We can place VR products into five broad categories. These are a mix of heads-up displays, or HUDs, and assorted peripherals — all offering varied levels of immersion.

The most basic VR kit in this category is appropriately known as ‘Cardboard’. It’s literally a piece of cardboard that’s cut and folded into a ‘viewer’ that you slot your smartphone into. The cardboard viewer has two lenses that you look through onto your smartphone screen that’s displaying the stereoscopic imagery. You then hold up the viewer to your face to enter another (virtual) world.

Affordable VR goggles like this only require a smartphone

These handheld viewers are also made of plastic, foam, metal and even wood. They’re cheap to manufacture, fun to use, and provide a medium level of immersion. Examples include: Google Cardboard, I Am Cardboard VR Create, HCVR Glasses, Knoxlabs, Eightones, or any one of these from Amazon

The next level up still requires a smartphone for the display, but these devices often include a strap of some description allowing you to wear the device hands-free. Many offer extras like the ability to control functions of your smartphone with buttons on the exterior of the unit, and one even offers a ventilation system to prevent the goggles from steaming up!Examples include: Google’s ‘Daydream’, Samsung’s ‘GearVR’, VROne, AirVR, Cmoar VR, Durovis, Pinch, Sunnypeak, Virtoba, Noon VR, Incredisonic, Homido, LG’s ‘360 VR’, ImmersiON-VRelia

If you’ve never tried VR before, placing your smartphone into a device to deliver you a VR experience is compelling. But, it must be said that it fails in comparison to the immersive grunt delivered by being tethered to a high-end computer. 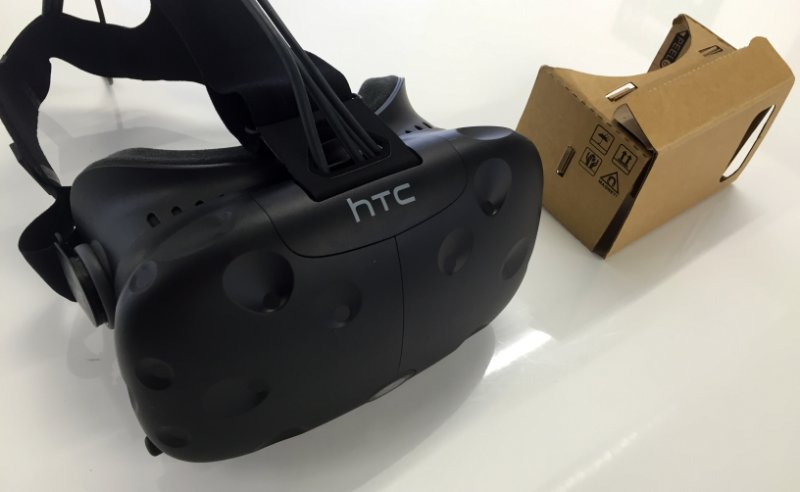 HTCs ‘Vive’ headset next to its cardboard counterpart

That’s the catch in this category. This means you have a cable coming out the back of your head that restricts your movement — a small price to pay for full, rich, immersion. Examples include: HTC’s ‘Vive’ (highly recommended), Oculus’ ‘Rift’, PlayStation VR, Fove, StarVR, OSVR, MindLeap, Claire, VRVANA

This emerging category does away with being tethered to a computer or gaming console by having all of the required technical hardware onboard the device.Examples include: Impressionpi, VisusVR, ‘PC in a backpack’ coming soon! Stream VR from your PC to your mobile also coming soon!

Sight and sound are the primary senses that must be engaged to ‘trick’ the mind into thinking you are somewhere else. But when you combine these senses with haptic feedback, interaction, storytelling, movement (and one day taste and smell) within the experience — then you’re transported to another level of immersion. Examples include: Roto VR Chair, Manus VR Gloves, Vive controllers, Rift ‘Touch’, Omnidirectional treadmill, Prio’s body suit, Feelreal VR

Welcome to the realm of 3D models, soundscapes, interactions, animations, textures, lighting and real-time 3D engines! At a (very) base level, to create a virtual environment you 3D model the elements you want and then place them into a real-time engine to add interactions and other elements. You can then explore your creation through VR goggles. Software developer kits (SDKs) are also available to help developers create quality VR experiences, and early versions of VR design guidelines are also helping to educate the market. 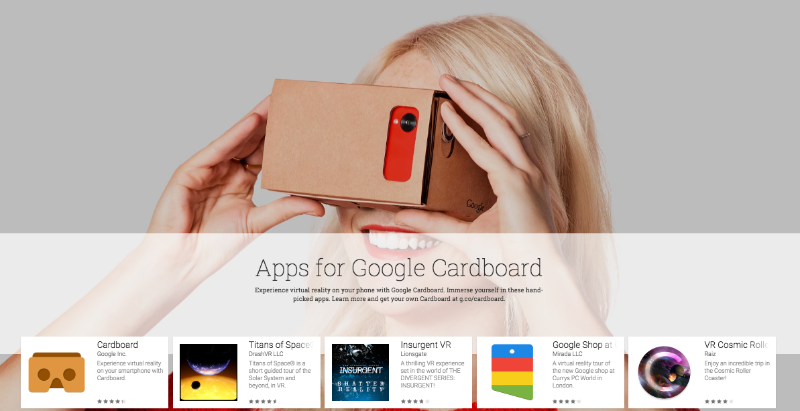 To ensure the users of your software are fully immersed, ensure you’ve created a ‘soundscape’ also known as ‘spatial audio’ for them to experience alongside their visual experience.

Since 2010 there has reportedly been $4 billion dollars invested in VR.

Hardware shipments alone will continue to skyrocket through 2016, ending the year with an estimated 9.6 million units shipped according to IDC. By 2020, combined VR and AR shipments are predicted to hit 110 million units.

There’s a two common misconceptions when it comes to the opportunity within VR for businesses.

“The technology is just for games”Wrong. Think of games as merely the sharp end of the spear where the technology is currently being popularised. The ‘next generation’ are being conditioned to new ways of experiencing and interacting with the digital world. Applications of the technology have actually already been around for a few years in the military, health, medical training, education, architectural visualisation, therapy, and tourism to name a few.

VR is already reshaping industries across the globe and is creating business value. For example, the first VR surgery was recently performed and is seen as transformational for training doctors in developing countries. In fact, VR is an excellent tool for any type of staff training.

“The technology is too expensive”Wrong. Anyone with a smartphone can download VR apps and place them into a ‘cardboard’ viewer. The apps range from ‘free’ to $5 and the cardboard viewers also range from ‘free’ to $5. For the higher-end VR experiences it is true that it costs significantly more, however the first wave of mass adoption for VR is the lower-end of the market that still delivers a fair level of immersion.

In business, the word ‘expensive’ only means that the value delivered is less than the value of the outlay. Even with the higher-end kit such as HTCs Vive, having one at each of your retail environments could engage customers like never before delivering more sales. Or, perhaps you can train your staff in a way that’s fun, engaging and results in fewer accidents, happier customers, or increased ROI? The opportunities are endless.

One cannot explain what the new wave of virtual reality technology delivers.

If you’ve not already, you MUST experience it for yourself.

Virtual (and soon augmented) reality experiences will continue to reshape how we interact with digital technology. Now is the time to begin to think about how it may affect you, your business sector, and humanity as a whole.

There’s plenty to learn, but it’s easy to get underway with something small that delivers value to your business.

Also by Greg+ Should I care about virtual reality?+ Be healthy, be quantified+ The bots among us+ Your apps could (should) be smarter.

The Case For Digital Transformation
Business Transformation
Strategy & Innovation
The Future of Business for an Intelligent World
Enabling Technologies
How Augmented and Virtual Reality Can Transform Your Business
Choosing Suppliers?