It’s not a matter of if but when…

A tech correction is coming. The only remaining question marks are when it will happen and how bad it will be. Let’s take a look at the evidence.

The NASDAQ index is now up around 5,000 points, the culmination of a terrific seven-year run in which it has tripled in value. The only other time it reached this level was just before the dot.com crash in 2000. In comparison, the Dow Jones has only risen by half as much over the same time period.
An unprecedented level of Venture Capital (VC) funding has fueled this rise. According to CB Insights, VC funding globally was just under US$50 billion in 2011, and jumped to almost US$90 billion in 2014. In the first three quarters of 2015 it reached US$100 billion. An increasing amount of this funding is going to large deals. In Q3 2014, 28 deals of US$100 million were done (provided to a sin 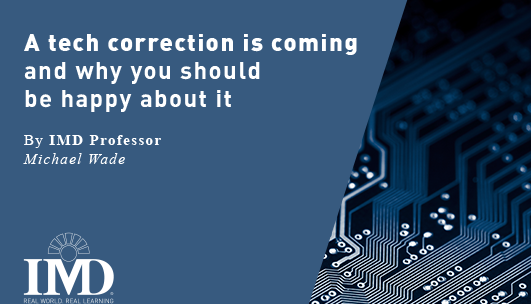 gle company in a single funding round). That number rose to 68 deals in the third quarter of this year.

These big bets are leading to huge valuations. The number of unicorns (private firms with valuations greater than US$1 billion) has exploded over the past 7 years. According to Credit Suisse, there were only 4 unicorns in 2009. That number grew to 124 by July 2015, reaching a total valuation of US$468 billion. It has continued to grow. CB Insights reports that 46 new unicorns were added in the past two quarters to reach at total of 142 at the end of October 2015.

Of course, rising investment levels alone do not mean a correction is coming. I am regularly told by insiders that these investments are justified by strong fundamentals, and that funding is coming from ‘smart money’ not unsophisticated retail investors like in the late 1990s. Let’s look at this a little more closely.

Most of the unicorns are losing money. Didi Kuaidi, a taxi-hailing app that dominates the Chinese market, raised US$3 billion in VC financing earlier this year, the world’s largest VC deal in the third quarter of 2015. The company’s CEO, Cheng Wei, proudly pointed out that the company had no profit plan within three to five years, and called his company “the internet start-up that has burnt the most money.”

Profit seems to be passé…

Jet.com, an online company launched in July 2015, has an ambitious business model – to become the Costco of the Web. The company originally planned to sell everything 10%-15% cheaper than anyone else, and rely on a US$49.99 annual membership fee as its exclusive source of profits. After a few months, it decided to drop the membership fee and, as a result, loses money on most of its sales. The Wall Street Journal wrote that one of its reporters purchased 22 items from Jet.com for US$275, but that Jet.com did not have many of the items in stock and thus had to buy them from competitors. The total cost of the order for Jet.com was US$518, resulting in a loss to the company of US$245. Marc Lore, Jet.com CEO, proudly states, “The bottom line is, we’re basically not making a dime on any of the transactions. We’re passing it all back to the consumer.”

Cracks are starting to appear, however…

Twitter’s struggle to attract new active users has threatened its ability to produce new advertising revenue. Wall Street Journal reports that the company’s ad revenue per user has fallen for four consecutive quarters. Twitter’s stock price has dropped dramatically to less than half its peak and well below its IPO price. In mid-October 2015, Twitter announced it was planning to cut 8% of its global staff, according to Bloomberg. Yet, despite its struggles, Twitter is still valued at just under $20 billion.

CNN Money reported that e-commerce site Fab.com, an ex-unicorn, suffered mass layoffs before it was acquired for an undisclosed amount in March. Last month, Evernote, valued as a unicorn in 2012, laid off several employees and closed three of its global offices. Even Mark Cuban, the grandfather of tech investing, has expressed concern over the current pace of VC funding: ‘There is no liquidity for these investments’.

I predict that the correction will occur within the next 14 month, i.e. by the end of 2016. On the surface, this may sound like bad news for everyone. Tech stocks will tank, and the broader markets will suffer as stock indices fall across the board. Venture capital funding will dry up, and hundreds of thousands of people will lose their jobs. It will not be a pretty picture.

But, this is actually a good thing…

First, it will level the competitive playing field. At the moment, tech companies are using VC funding and high valuations to build unsustainable businesses, like Jet.com and Didi Kuaidi. They are being rewarded for high-flying, yet unproven, strategies and questionable decision-making. Meanwhile, rational markets are being distorted and traditional companies are forced into making poor business decisions in order to compete. A correction will most certainly reduce this inequity.

Second, valuations will fall back into line. Uber is a great company, but there is no rational way to justify its valuation of $US50 to US$60 billion. That’s as much as Honda or Dupont, and yet Uber is still not turning a profit. Snapchat has 100 million users, but it is hard to justify a valuation of US$12 billion for a company that hardly makes any revenue, never mind profit.

Third, the flow of talent to tech startups and Internet giants will slow to a trickle. Legacy companies with strong fundamentals and sensible strategies have been seeing an exodus of good tech talent, and have struggled to attract younger generations of tech savvy managers and executives. After the crash, traditional companies undergoing digital transformation will find it easier to hire the help they need.

Fourth, opportunities for traditional companies to disrupt their markets will open up. The coming tech correction is going to hurt, but like a controlled burn, the economy will be better for it in the long run. The exit of many digital disruptors will create space for incumbents to become the disruptors themselves.

Now is the time for traditional companies to prepare. The unicorns may be unsustainable, but they are pointing the way to value vacancies in the market that incumbents can occupy. Smart organizations are building a foundation of digital business agility, so they can quickly and effectively adapt to the upcoming market turbulence. They are digitizing processes, building digital platforms, upskilling their workforces, and incorporating digitaltransformation into their strategies. The digitization of the economy is not going away and a correction in the market will only make it more attractive to incumbents.

I am the Cisco Chair in Digital Business Transformation, and Professor of Innovation and Strategy at IMD.

I am co-Director of IMD’s new Leading Digital Business Transformation program (LDBT) designed for business leaders and senior managers from all business areas who wish to develop a strategic roadmap for digital business transformation in their organizations.

I am also co-director of the Orchestrating Winning Performance Program (OWP).