I actually moved to Texas on July 14, 2014. Prior to that, my wife and I were living in Minneapolis. I had finished graduate school in Minneapolis in May ’14, and eventually I landed a job in Fort Worth — so, we moved for that job. I had no idea what to expect from north Texas and Ft. Worth, having never lived there, but I ended up liking it a lot.

The holidays were a slower time for hiring, surely — but 2016 will be a big year for networking for me.

How can I approach it?

There are literally entire sections of bookstores dedicated to the science of relationship-building, especially in a business context, so what I’ll say here will only scrape the surface of the topic, to be sure.

Let’s start with a basic assumption: relationships are pretty much everything. They will drive how you get jobs/opportunities, how you drive sales, how you feel comfortable/engaged at work, and, honestly, most of your personal social happiness.

So rather than running around all the time talking about how busy you are, it would make sense to think about how to build, and invest in, relationships towards a new year. Right?

Here’s some good advice from a guy who works with a lot of the top Silicon Valley firms. The overall approach is called “mindshare,” which sounds like a buzzword term. You start with the idea of “Dunbar’s Number,” which posits that you can maintain about 150 stable social relationships at any given time. (The range for the number is 100 to 250, generally-speaking.) Then, you identify “Legends” in your life — that’s a group of 20 to 30 people who have consistently demonstrated support for you.

Here’s a visual on Dunbar’s Number: 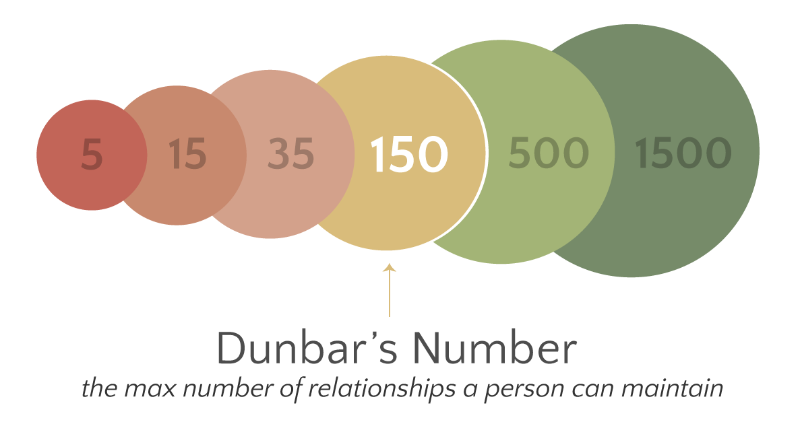 Now, ask yourself: In the last month, how many of these people have I made contact with?

When they do these exercises in Silicon Valley — a business-first type of place — often the number is under 50 percent for the respondent.

That means, essentially, that out of the 20 people you think support you the most, you often go a full month speaking to less than 10 of them, probably because you’re very busy with your own day-to-day.

But still, that seems odd, no?

So here’s what you do: give or take, there’s about 20 working business days in a month. Each day, you reach out to 1 of those 20 with a quick e-mail or voice mail or Facebook message or whatever. You can just say hi and give a little update, or even send them an article of value related to their job, etc. If you do this every day, you start to build a habit out of it.

If you build a habit and start to do it every day, there’s a chance that, across 2016, you’ll reach out to 260 connections of yours and put yourself front of mind with them.

This is important, because so much of business and just general opportunity-getting is serendipity: you’re in front of a person at the moment that person has something that could benefit you. I can’t tell you how many times that’s happened for me in terms of writing freelance for a client. It’s pretty much all accidental luck in some ways.

But if you’re consciously out there putting yourself at the front of other people’s minds, it’s less luck and more strategy. That’s positive.

Dorie Clark, who writes really well about business and networking matters, recommends a similar concept: essentially, keep people in your orbit. Going to San Francisco for work? Send a LinkedIn message to all your SF-tagged friends/partners and propose a Wednesday night happy hour meetup for “new friends and opportunities.” People will come. You were the center of it. That’s a huge thing in terms of relationship-building.

Clark has another post, from 2013, about Michael Katz and how he keeps old/gets new business — and the strategy is very much designed around connection and one-per-week coffee chats. In some ways, this whole thing is why company leaders often de-prioritize digital: it’s a huge technological wave, yes, but … almost all true business still happens face-to-face and individual-to-individual.

The Importance of Mindshare in Networking

Back to that mindshare idea. Look at what happens in general with business interaction:

When you have the lunch meeting, you’re front-and-center. That’s 100 percent attention from the other, generally-speaking. That declines pretty fast. But with repeated exposure — i.e. you sending them something one day, randomly, or another lunch meeting — the rate of decline becomes less and less. That’s basically how friendships are made. We all start as strangers, but over time we have repeated interactions with people we like, and they morph into friends, so that the rate of decline in terms of knowledge and rememberance is basically nil.

This article has a lot of buzzwords, but the underlying idea is right: go the extra mile for people, dial it back when necessary, and step up when you’re not asked. All those things build and foster strong relationships.

Here’s a good take on all this from Harvard Business Review — it’s structured a little bit like “Hierarchy Of Needs,” although in this context, “self-actualization” — the final stage — would be moving a business relationship to a point where it can exist without a business need. (I’d argue that typically happens with neighborhoods, or with your spouses becoming friends, etc.) The building blocks to get to that place are the same as we’ve been discussing: being liked, being respected, having your “whole person” admired (what you stand for outside of work), and staying front-of-mind with your contacts.

One person per day.

The chance to connect, or re-connect, with 200+ people across the year.

Who knows where that could lead or what could happen?

My name’s Ted Bauer; I blog here regularly and you can learn about hiring me for freelance and contract gigs as well. You can also subscribe to my newsletter.

Customer Engagement
Is there anything more worthless than the Twitter/LinkedIn Auto-DM?
Customer Engagement
Instagram Decision to Go Long Form on Video, Stealing Millennials from Youtube
Analytics
The Single Biggest Thing Missing in Research Today: A Discussion with Ron Sellers
Secure The Talent You Need